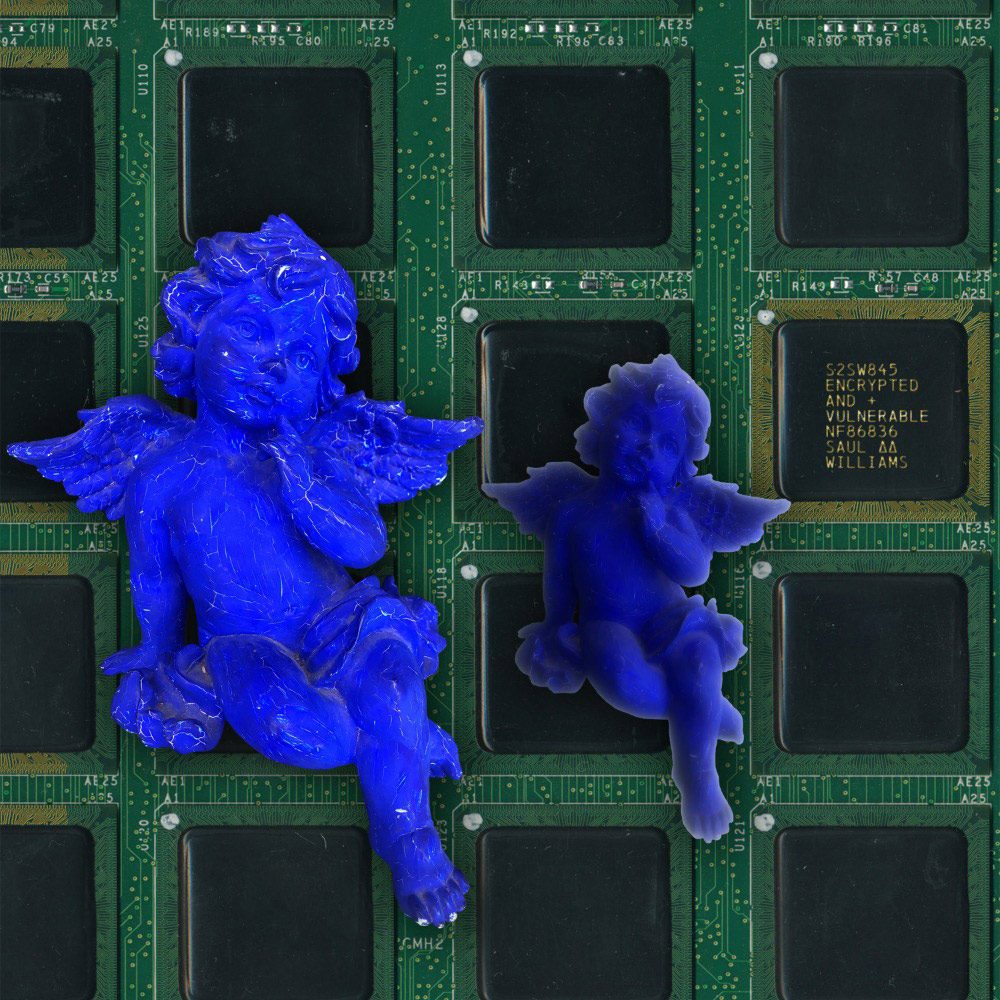 Track List:
Coronation As Harness
I Own The Night (Sufi Vision)
Experiment
Underground
Before The War
People Above The Moon
Encrypted & Vulnerable (feat. Christian Scott aTunde Adjuah)
Fight Everything
Dare
Full Of Shit (feat. Lippie)
Infinite
Magnify The Feeling
Thought About It

Saul Williams has called us to task again with a musical belief system.

Encrypted and Vulnerable, is the second in a series of three albums and part of the multi-tiered MartyrLoserKing project—the graphic novel and sci-fi cinematic musical written and directed by Williams himself. Neptune Frost is meta protagonist in the film who eventually takes on the hacker name MartyrLoserKing.

The first album, MartyrLoserKing (2016) was a bold intervention—it introduced a village made up of recycled computer parts to the geographically challenged American psyche. The album tied together the Trump presidency, avatar dust, and conflict minerals and directed our attention to the high we’ve been on from handheld devices, cars, and cameras; devices that can’t exist without natural resources found where Central and East Africa converge. Burundi. Rwanda. This is where the story takes place and where the foundational principals of the music begin.

A surface reading of the larger project might lead one to believe the work to be a trite critique of online culture, when in fact MartyrLoserKing links tech addiction and 18th century plantation culture to discarded motherboards and mystical anarchy. The vision around it is both informed and speculative. And in summarizing these sentiments through the song “The Bear/Coltan as Cotton,” on the first album, the lyrics are instructive, not didactic:

Encrypted and Vulnerable builds on this emotional intelligence with rhythmic rigor. The contemplation on what we/you/I ingest remains a focal point:

Who can you trust?

What will they teach?

What will you learn?

Encrypted and Vulnerable progresses the conceptual musical game. Hackers as artists. Hackers as activists. Hackers as public servants. A brilliant absurdity filling the pages of Neptune Frost’s ‘sonic fiction.’ In the world that Saul has created is a love story between an inter-sex runaway and an escaped coltan miner and the virtual marvel born as a result of their union:

What We Were Destined For

The great thing about sequels is that we get to witness the growth of an artist in real time. We have a map and can search for what the story is moored by. You can sense when it’s both improvisational and consistent. We get to watch this artist move with patterns, not trends.

Encrypted and Vulnerable sets a new standard in electronic music that falls along the lines of what Kodwu Eshun, describes as “AfroDiasporic Futurism—a webbed network of computer rhythms, machine mythology, and conceptechnics which routes, reroutes and crisscrosses the Black Atlantic.” But that’s not enough. The moment I rest with the idea of a category for Saul he kicks a hole in the speaker, pulls the plug, then he jets. In his own words, he separates his approach to ancient cosmology from popular discourse about the future:

I’ve been waiting for this public interest to arise in what we’re now terming “Afrofuturism.” I don’t give a fuck what you call it. I think there’s an American tent to that term. I think it comes from a Western gaze, where the idea of what others might call “magical realism” has existed in other cultures and in African cultures in particular for eons.

Encrypted and Vulnerable speaks to Williams’ growing relationship with Afro-digital epistemologies, his migration as an artist, and his ongoing dance with theater. It’s minimalist and compelling. And the ratio between voice and music leaves room for your questions and dialogue, which indicates a great distribution of silence and space. Intentionally repetitive like ritual. Trance. The place where respectability meets genre promiscuity. Party, no bullshit.

The samples are sparse and made up of found objects. And in fact, every Saul Williams album is a becoming of the archives of his mind. A repository for literary, cinematic, and political points of reference. A street scholar listening practice.

They took my cells

re-cut the keys to the kingdom.

So, what do we make of the harvesting of Henrietta’s DNA and global ancestors who benefit from a cyber payback? In the spaces between the album’s verses lives their/our collective revenge fantasies. There’s a politic of care that comes out through the lyrics. A real love for People Above the Moon.

The vulnerability is in the drum programming and looping. Strings, keys, and finger pianos. It makes sense that for this album, Christian Scott and Saul Williams came together. Scott composed the drum programming for “I Own the Night” and “Underground”. In a recent conversation between the two, Scott explained that the type of music he is crafting is “stretch music—a genre’s blind attempt to acculturate all of these seemingly disspirate musical groups, cultural groups, into one space and it’s built on the synergy between all of those cultures”. This signature sound comes through and clashing of people and places can be heard on each track.

Encrypted and Vulnerable is mixed by Gonjasufi, who plays live guitar on “I Own the Night.” And long-time Saul collaborator and mad scientist CX KIDTRONiK conducts the drum programming on “Fight Everything.” It’s a good cast of musically colorful people.

Though Saul will forever be categorized, and justly so, as a poet, with time he’s become more than a spoken word artist to listeners—he’s the narrator of the otherworld translated through his imagination. As a self-proclaimed agnostic student of the black church, I can tell that the voice behind this project grew up studying the cadence of a father who was a Baptist minister. And so too did Aretha. And when you transform that pulpit energy into your own brand of holy funk it gets beautifully trickier. This epic story made of words and sounds is the business of a trickster.